Cross Sectoral Collaboration five years after the launch of Vision 2030

Five years ago, HRH Crown Prince Mohammed bin Salman launched the ambitious Vision 2030, and said, “We will work tirelessly from today to build a better tomorrow for you, your children, and your children’s children.” Since then, there’s been a high level of national commitments, among leaders of both the public and private sectors, as well as citizens to make this plan a reality.

So, how has the private sector been playing an active role in achieving the Vision?

Since Vision 2030 was launched in April 2016, the socioeconomic reforms in the Kingdom have been unprecedented. Top-down policies designed strategically by the public sector to enable the growth and the diversification of the economy have also been met and coupled with bottom-up engagement by the private and third sectors to activate organizational development starting within their entities and expanding beyond to affect the ecosystem in which they function.

“As the Saudi economy transformed into a more advanced and diversified one, the private sector was set to take the lead, being the carrier of high-level knowledge and skills, innovative capabilities, and research and development.”

What is Cross-Sectoral Collaboration?

In Saudi, when Vision 2030 was first launched, one of the sub-sectors to activate cross-sector collaboration was the F&B sector. There was a need for improved policy amendments to support the growth of the sector to reach the aspirations of Vision 2030.

Back then, the F&B sector was valued at 60 billion SAR, with SMEs making up over 90% of the sector. The potential in the sector to grow economically, expand operationally, and employ both female and male Saudis made it an attractive yet important sector to develop.

Thus, a group of private sector leaders in the industry from large companies came together to organize one of a kind private association (third sector) that would serve on representing the interest of the sector as a whole by advocating for policy, legislative, and framework amendments to support the sector as per the targets of Vision 2030.

The beauty here is that these advocacy efforts were met with public sector partnerships positively embracing the private sector as a partner and a contributor in achieving the Vision. Even though at first glance it would seem that the objectives of both the public and private sectors were different, cross-sectoral collaboration was still achieved and the private sector was set to lead.

Cross-sector collaboration is made possible by using differences as an asset—differences in resources, experience, demographics, industry, and sector, as well as differences in perspective, such as assessments of risk, time, and scale.

Today, that sectoral group of leaders is now called: Qoot Restaurants and Cafes Associations. A private association with an annual strategic advocacy plan designed to achieve the objectives of Vision 2030 within the programs and initiatives rolled out by the association.

Such initiatives and discussions contribute to shaping the roadmap toward a diversified and sustainable Saudi economy. 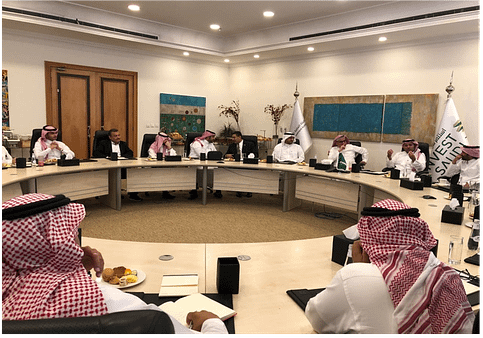 Based on a Stanford University Social Innovation Review Paper:

“Collaboration is nothing new. The third sector is filled with examples of partnerships, networks, and other types of joint efforts. But collective impact initiatives are distinctly different. Unlike most collaborations, collective impact initiatives involve a centralized infrastructure, a dedicated staff, and a structured process that leads to a common agenda, shared measurement, continuous communication, and mutually reinforcing activities among all participants.”

Through the work of Mukatafa Consulting, we have developed a methodology of work that’s enabled us to organize sub-sectors, study their current legislative challenges that are restricting companies of growth, benchmarking them off of global and regional markets, and working towards the development of a sectoral advocacy strategy that would be implemented through the establishment of a private association.

Let’s break it down:

Private associations serve as effective cross-sector leaders. They are designed to approach and engage key stakeholders. But in Mukatafa, we take them one step further: these associations have the capacity to map the ecosystem of each sub-sector, and commit to bringing together both sectors (private and public) as co-designers, addressing policy amendments to achieve Vision 2030, such that all stakeholders engage in activating a joint public-private partnership.

Shortly after mobilizing and organizing the F&B sector under Qoot Association, we have also worked on the Manufacturing sector with a clear advocacy strategy on improving the sector. The group of industry leaders was called: Sina’a. 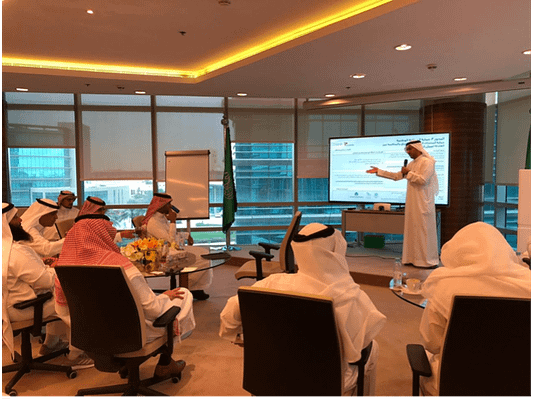 Referring back to the Economic Diversification Under Saudi Vision 2030, the research findings showed that the relative share of the Kingdom’s wholesale and retail trade, restaurants, and hotel sectors to the gross domestic product (GDP) was expected to reach 16 percent by 2030, followed by transport, storage, and communication.

The Qoot Restaurants and Cafes Associations began in 2018, shortly after Vision 2030 was launched. Today, there are several private associations across the retail sector that have been initiated with the same aim of developing the Saudi business environment:

Where we are today:

Today, the level of engagement that exists with the Saudi cross-sector collaboration is truly unprecedented. When HRH Crown Prince Mohammed bin Salman promised us all that the government would “work tirelessly from today to build a better tomorrow” it became very apparent that Vision 2030 became a spoken language that has been translated across not only the public sector but also the private and third sectors.

Five years after the Vision’s launch, the level of involvement and engagement between all three sectors to develop the business ecosystem is seen in how successful Qoot, Sina’a, Moan, ZY, and many more private associations have become.

Today, the Private and International Education sector is also being organized under one sectoral strategy through the partnership of the Council of Saudi Chambers, Emkan Education Company, and Mukatafa Consulting. Where the goal of the sector is to strengthen privatization and improve the quality of education across all schools, operators, and investors.

Growing up in Saudi, we’re taught “the Sky is our ambition.” It’s a lesson that we are now witnessing come to life every day.

The growth of cross-sectoral collaboration is a testament to how much more we can do once we all engage towards the same goals for greater economic growth.

Razan Farhan Alaqil is a Director of the Public Policy Advocacy Department at Mukatafa Consulting.

She primarily leads policy reviews, representation of the private sector to the public sector, and ensures the engagement of both sectors in sectoral policy priorities.

She has experience working with and representing Saudi Youth and working on the 2030 Agenda the United Nations Economic and Social Council’s (ECOSOC) Youth Forum, the United Nations Youth Assembly. She’s a co-founder and the Saudi permeant representative to Arab Youth Platform for Social Development at the League of Arab States.

She has previous experience working with the Ministry of Sports and was a Vice-Chairman for the Saudi Sports for All Federation.

She holds a Bachelor of Arts in Political Science with a Concentration in International Comparative Politics, and a Minor in Global Studies. Razan’s insights have been published on the Arab News as a contributor.