The U.S. Election’s Impact on the Saudi Economy

As Joe Biden and Kamala Harris claim victory in the U.S. Election, we at Mukatafa want to break down what a transfer of power means for the Saudi Arabian economy and significant relations within the Middle East.

This unprecedented duo seeks to unite the U.S. with calls to healing. “I pledge to be a president who does not see red or blue states, but United States,” Biden said. “This is the time to heal America. Let this grim era of demonization in America begin to end, here and now.”

Saudi Arabia’s King Salman and Crown Prince Mohammed bin Salman congratulated both Biden and Harris on Sunday with wishes of further progress and prosperity for the American people, according to the Saudi Press Agency.

Many analysts and politicians around the world say this election could change the Middle East’s major players’ political calculus. With calls to foreign trade amid COVID-19 and a lower oil demand compounded with a worldwide lack of travel, this election calls to play all moving parts of the global marketplace centered in Saudi.

As the world awaits to see how the Biden-Harris administration takes on matters of the Iran nuclear deal, the War in Yemen, the Syrian War, Chinese trade relations, and the impacts of lower demands of oil worldwide due to COIVD-19, some officials have expressed cynicism over U.S. policy even if Biden pursues diplomacy rather than President Donald Trump’s blunt approach to the region’s unrest.

Abdulrahman Alrashed in Al Arabiya, affirms Biden as the most “globally aware American politician to become President of the United States since President George H. W. Bush in 1990.” He said that Biden may be the president that is needed to strengthen the U.S.’s relationship with Riyadh, which has been “caught in the crossfire between the Democratic and Republican parties for the past four years.” 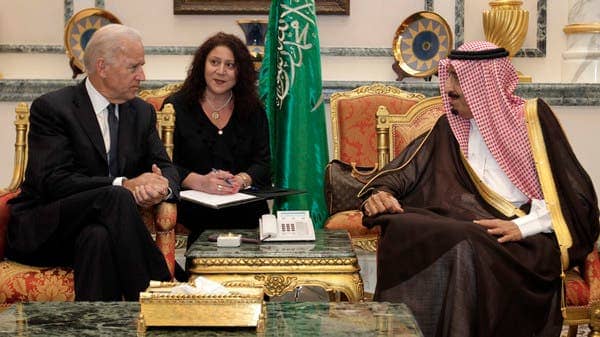 Biden will embrace free trade as a centrist, pragmatic democrat. His leadership will restore international institutions, including the World Trade Organization, to unify the global marketplace. As a former Vice President and Senator, Biden is known for his foreign policy expertise. He views a robust U.S. presence in the world as critical to U.S. power and prosperity, and one way the U.S. has helped maintain a liberal order since 1945 is by wielding its power through institutions.

This notion alludes that while Biden will prioritize human rights over a global economy, he will also lead with encouragement for many companies and countries to diversify their economies. Abdulrahman Alrashed echoed similarly with, “Today, Saudi Arabia is more important than ever as a global supplier of energy, one of the key factors that play into US foreign policy.”

Ultimately, the Saudi economy and Middle eastern relationships with the U.S. have a lot less at stake with Biden’s platforms of peace and prioritization of a healthy global marketplace. As the U.S. reports over 100,000 new COVID-19 cases in a single day this week, the severity of a change in national and global treatments of this pandemic increases in urgency. Biden pledges to partner with the U.S.’s leading infectious disease expert, Dr. Anthony Fauci, with plans to prioritize a vaccine, offer free, widespread testing, and respond to the economic crisis with subsidies for businesses and families impacted the most by this economic catastrophe.

But we must remember, even as the essence of U.S. democracy continues to be challenged as Trump sues blue-swinging states and election offices across the country, that these relations and the building of our global economy must transcend political parties. We are the people — international people — and the power has and always will be in us.